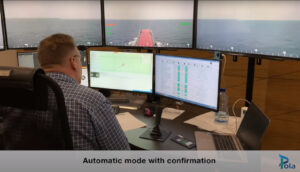 “This year, we are completing a large-scale a-Navigation Trial Project – in real conditions – and beginning a national experiment on the trial operation of autonomous vessels under the Russian flag. In December last year, the Russian government, the Flag State administration, approved the Decree on conducting such an experiment, considering the IMO’s Interim Guidelines for the Maritime Autonomous Ships Trials. In accordance with it, any shipping company will be able to equip its ships under the Russian flag with autonomous navigation systems and operate them in their regular activities as part of the national experiment”, – he emphasized.

Large-scale Autonomous Navigation Trial Project, being the world’s largest and the most ambitious one, was launched in 2019 by a group of Russian shipping and technological companies, research centers, and universities under the umbrella of MARINET.