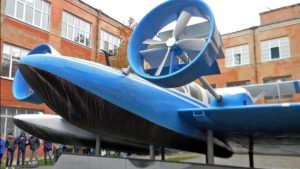 The MARINET Meeting in an expanded format, which was attended by more than 100 representatives of leading companies, scientific centers and universities of the marine industry, as well as government agencies and development institutions, was held February 28 in the Nizhny Novgorod State Technical University named after R.E. Alekseev. The practice of regional MARINET meetings is aimed at attracting new participants projects at the expense of representatives of the regions. Nizhny Novgorod, which is one of the leading centers of Russian shipbuilding, information technology and instrumentation, has become a new step in the regional development of MARINET.

The participants noted that high-speed water transport – ekranoplans, hydrofoils, high-speed hovercraft – are a promising segment of the world market, where Russian shipbuilders still retain some of the leading positions. New high-speed vessels will be able to compete in speed and convenience with airplanes, and outperform them in economy. Projects in this area were submitted to the Central Design Bureau for SEC of them. R.E Alexseva, RDC Aqualines and CSRI “Course” in cooperation with IC “Aeroghod”.