Over 40 applications are submitted for the UMNIC final 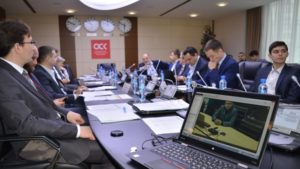 On December 20, JSC “United Shipbuilding Corporation” hosted the final selection of the UMNIC program in the MARINET areas. The UMNIC program of the Fund for the Promotion of Innovation is aimed at supporting commercially oriented scientific and technical projects of young researchers, for the second year it has been conducted for the MARINET areas.

Within the program, the Foundation provides grants for scientific research carried out by specialists aged 18 to 30 years.

This year, about 70 applications for various directions of the Marinet road map were submitted to the correspondence stage of the competition, over 40 of them were submitted for the final selection stage.

Young researchers from various regions of Russia – from Vladivostok to Kaliningrad, from Tomsk to Taganrog – submitted their applications on a wide range of topics: from technologies for detection and elimination of environmental pollution to new models of vessels, from hydroacoustics to computational modules for marine robotics.

The selection committee was attended by heads and experts of JSC “USC”, the Fund for the Promotion of Innovation, the MARINET and NTI.

The final results of the selection and the list of winners of the contest, which will receive grants from the Fund for the Promotion of Innovation, will be published by the Fund in January 2018.