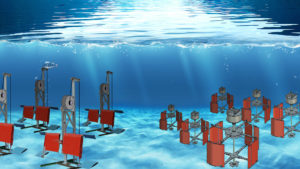 The project focused on the implementation of the road map Marinette to develop the energy resources of the ocean. In ocean currents (surface and deep) are concentrated huge reserves of kinetic energy (about 7.2 – 1012 kWh/year) that can be converted into electricity. The development of only 0.1% of the energy potential of the ocean can provide energy for 15 billion people. The entire area of the World ocean cross currents having different directions and speeds.

There are a large number of oceanic currents with flow rates from 0.4 to 1 m/s, which modern developers gidroenergostroy not even considered, as it is believed that the use of energy data trends are not yet commercially profitable, as at the present time there are no technical solutions for efficient energy conversion low flow velocities. At these low velocities the use of traditional transducers kinetic energy of the flow of water in a mechanical – hydraulic turbines – is ineffective.

The authors of the project offers a new and effective solution to the problem of energy conversion marine, ocean, tidal flats and currents, based on developed by LLC “Energonositeli” installations “Diving wing” and ” wing rotary rig”. The installation of the “Diving wing” converts the energy flows in the energy of reciprocating motion of the wing, which can then by using linear generators to convert into electricity or be used for pumping water, lifting water for irrigation in agriculture and other applications. The use of linear motion of the wing at the optimum angle of attack to the oncoming flow, allowed us to maximize the use of the energy of the moving wings, as removal of energy is performed uniformly from the entire surface of the wing, in contrast to different types of screws used in prior art, in which during rotation is effectively used only a small part of the blade, and the screw is only effective at high speeds, which significantly limits their use in terms of small velocities of oceanic and marine and tidal currents.

The developers managed to implement this mechanism, using only physical and hydrodynamic effects arising in unsteady flow past a dynamically linked surfaces, there profile. Making the installation simple, without the use of any automation, reliable and inexpensive. Another installation is “rotary wing buds gidroenergostroy” also is an innovative design which thanks to the invention of a fundamentally new type of rotor, there are used physical effects, earlier, in this type of installations is not known, and unused. Significantly increase the efficiency of conversion of energy flow. The principle applied by the authors in this installation have been successfully tested in the wind turbine, also designed and implemented by the sponsors.

Experimental operation of a prototype of a prototype wind turbine showed that its efficiency was significantly superior to all previously known and operated analogues in Russia and abroad. Experimental research prototypes proposed in the project settings efficiently convert the energy of the stream at velocities from 0.3 m/s. use one or the other of the displayed facilities depends on the operating conditions. So, wing rotary rig  rig can be successfully used for energy recovery of tidal currents, so it does not depend on the direction of flow. At the same time the installation of the Diving wing are most effective for underwater sea, ocean, river currents.

The head and the author of the project — Terentev Andrey, CEO of LLC Energoinnovacii Russian Federation, 428000, Cheboksary, Kalinin St., 32