Summer 2019: MARINET opens a series of educational events for schoolchildren 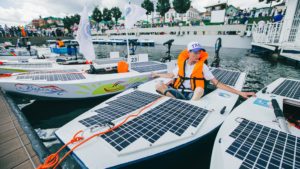 The summer of 2019 is becoming one of the most active educational events for schoolchildren by MARINET.

On June 10-28 the first project camp of MARINET was held on the basis of the Skolkovo Innovation Center (Moscow region), on June 27-30 the engineering competition “Solar Regatta” took place in Kazan, including new class of unmanned models on solar batteries.

On July 1, the “Big Challenges” session began in the “Sirius” educational center in Sochi, where MARINET traditionally organizes track “World Ocean and the Arctic Development”. And at the same time the session “The Sea – the Vector of the Future” was started for young navigators from Russia and Canada in the Children’s Center “Orlyonok”. 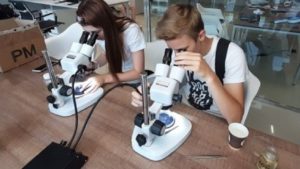 On June 10-28, within the framework of the Marinet project camp, organized by Marine Innovations (one of the MARINET participants) together with the Skolkovo Foundation, the MARINET Industry Association, the University 2035 and partners, school teams completed practical projects in the field of ocean research, robotics and edutainment. The focus of the first MARINET project camp is a new look for a new generation on the ocean development: ecology and people in the spotlight. Five projects were devoted to this.

A team of 9-10 grade schoolchildren from the Moscow region and Nizhny Novgorod under the guidance of experts from the ScanEx group implemented the project “Search for offshore oil fields based on satellite imagery data” and analyzed 84 satellite images of the southern part of the Caspian Sea from May 1 to 31 2019, on which 197 slicks (oil films) of technogenic and natural character were found. After systematization and analysis of data schoolchildren have identified 38 areas of probable oil fields and developed a general map of oil spills in the Caspian Sea. In addition, they have identified the dependence of the spill area on water temperature, maps of the most frequent industrial pollution and etc. As a result of the project, there was developed a prototype service for the initial search of offshore oil fields based on satellite Earth monitoring data, which can be applied to any other water areas. 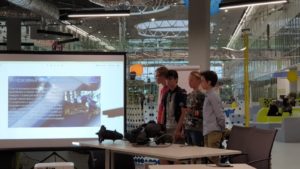 In the “Digital Water Pond” project schoolchildren built a model of a pond in Skolkovo based on the hydrobiology, geophysics, geochemistry and geology researches. Here they were assisted by leading experts from the Center for Marine Research of Moscow State University and Marine Innovations. The team of the project “Digital sextant” under the leadership of representatives of the Admiral Makarov State University of Maritime and Inland Shipping upgraded the navigation device’s scheme, which made it possible to obtain accurate readings from the device for further processing using software methods. In addition, they developed a 3D model both of the navigation sextant CHO-T and the electronic hinged unit. Scenarios for the gaming environment aiming at attraction of a wide audience to marine robotics were developed by students together with Siconica experts in the project “Interactive Edutainment for Marine Robotics”. And “Star Fleet-2” project team created a prototype of floating islands with the implementation of elements of a hypertechnical system – with assistance by experts from Kaliningrad State Technical University and the NBICS laboratory. 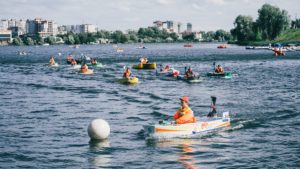 Then the baton was picked up by engineering competitions “Solar Regatta”, one of the largest educational projects in Russia to popularize engineering creativity and modern environmental technologies. As a part of this international competition, teams of students and schoolchildren design and build solar-powered vessels that compete with each other in various disciplines.
During the stage of the “Solar Regatta” held on June 27-30 in Kazan the 38 school and 7 student teams from 26 regions of Russia took part and competed in the speed, maneuverability and endurance of environmentally friendly boats. Before this, during the school year, the school teams had theoretical and practical courses in shipbuilding and the use of renewable energy in water transport. And the competition was completed by the Scientific and Technical Forum “Renewable Energy in Water Transport”.

“The “Solar Regatta” is not just a competition of young engineers. This is a school of life, bringing up “specialists of the future”, possessing technical literacy and able to freely navigate the latest trends and technologies. Participation in competitions is available to anyone who is interested in shipbuilding, environmental technology and is concerned about preserving an invaluable clean water resource for future generations,” says Yevgeny Kazanov, director of the organizing committee for the competition.

And on July 1, in the Educational Center for gifted children “Sirius” has launched the next session “Big Challenges”, within which MARINET organized the track “World Ocean and Arctic Development” – this year it presents five projects by MARINET participants. Schoolchildren together with experts from technology companies and universities implement the following projects.

“Amphibious unmanned cargo platform for the Arctic” ensuring the delivery of cargo from a vessel on the roadstead to the coast in the Arctic. The main design feature is used as propulsion 4 rotary multiple augers, which allow the platform to move in any given direction (straight, curvilinear, lag) on ​​the water, out of the water to the shore, along the coast, on the ice.

“Ship automatic movement system with VR-interface” involves the development of a system for automatic collision avoidance from dangerous objects and its testing using models of ships in the natural waters.

And in the “Diving Wing” project schoolchildren will develop, manufacture, test and investigate a model of a wing installation for converting underwater currents into electricity. At the same time, they will have to create a test bench – a counter-flow device for testing the installation in the pool. 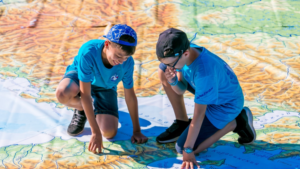 And at the same time, the National Children’s Center “Orlyonok” launched the session “The Sea – the Vector of the Future” where an interesting cognitive program and practical training within the framework of the “Solar Regatta” was prepared for 100 young navigators from Russia and Canada.

For three weeks, boys and girls from 11 to 16 years old are studying applied marine disciplines, taking part in interactive presentations, games and sea quizzes, mastering modern marine equipment, innovative shipbuilding and ship modeling. And the final of the session will represent the race of radio-controlled unmanned ship models powered by solar energy built by schoolchildren. Five teams during the camp shift will build 5 UAVs and present them at competitions.