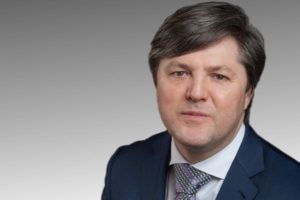 The Government Committee for Modernization of Economics and Innovative Development of Russia appointed Victor Olersky as a new chairman of MARINET. He replaced Sergey Generalov, who led the MARINET since 2015.

Viktor Olersky is a well-known representative of the Russian maritime industry, combining the successful international business experience and experience of statesman responsible for the state policy in water transport area.

He was born on April 26, 1965 in Liepaja, the Latvian SSR. In 1987 graduated from the Leningrad highest engineering sea school of the admiral S.O. Makarov in Radio engineering. Candidate of Technical Sciences.

MARINET is one of the first working groups of the National Technology Initiative and supports the development of promising technologies in the maritime industry. Today MARINET involves over 100 organizations: from large corporations to start-ups, research centers and universities, responsible government agencies. Since 2016, MARINET has supported more than 80 projects in the field of digital navigation, technologies for ocean resources development, innovative shipbuilding and human capital development, and implemented various initiatives to improve legislation, popularize and develop maritime high-tech.