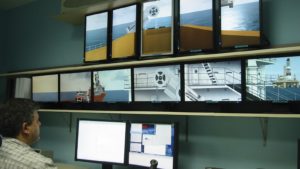 Government Commission for Modernization of the Economy and Innovative Development of Russia approved support of the project Technological platform to develop the unmanned navigation systems based on computer simulation in virtual environment. The total budget of the project is 6,75 million USD. The amount of state support will be 60% of the project budget.

Today the autonomous shipping technologies are the most promising trend in the development of the global maritime industry – both for the civilian fleet and for the Navy. Ships with a high degree of automation will allow to reduce the cost of the crew on board, which are 30-40% of the daily operating expenses of the vessel now – this is one of the key reserves for cost reduction by shipping companies. At the same time, these technologies will reduce the impact of the human factor, which is the main source of not only incidents in the field of shipping safety, but also economic losses associated with inefficient vessel management.

However, the cost of wrong decisions during implementation of the unmanned navigation technologies and increasing the degree of automation can be extremely high. “Trial and error” method on real vessels is extremely dangerous, expensive and will take a long time due to the rarity of extreme situations (fog, storm, equipment failure, etc.).

Implementation of the project will create an open platform for virtual modeling of thousands of situations and options for the automatic and remote navigation – in safe and cost-effecient way.

The platform will be used by various consumers – developers and manufacturers, shipping companies, classification societies, training centers – for the safe development, testing, certification and provision of regulations for all ships and their subsystems, as well as for crew training. Virtual modeling will significantly reduce the cost of these works and facilitate the cooperation of various industry participants.